The Halliday Clark designed Hawkwind project in Hawksworth came out on the top of the pile at the 2017 West Yorkshire Local Authority Building Excellence Awards which took place on Thursday 29 June in Wakefield. The scheme won the best individual new home category in recognition of high standards of construction and workmanship.  The scheme will now go head to head with the rival winners  from the same category in the other Yorkshire regions to compete for a place at the national LABC Awards which are set to take place in London in November 2017. For more information regarding the… Read more

A 92 unit housing scheme in Flint town centre, North Wales is nearing completion with tenants beginning to take occupation. The scheme is one of a number of projects that Halliday Clark are designing for Wates Residential as part of Flintshire County Council’s SHARP (Strategic Housing And Regeneration Programme) which will ultimately see the delivery of over 500 new homes across the region by 2021. Please refer to The Walks project page for more information.

The first affordable housing scheme under Flintshire County Council’s ‘SHARP’ programme has been successfully completed.  The site, located at the former Custom House Lane School, Connah’s Quay, consists of 12 no. 2 and 3 bed dwellings and is the first of a number of schemes within the region under the programme to be delivered which will ultimately provide 500 new homes by 2020. The Custom House scheme featured in a recent online BBC News article outlining the council’s steps towards providing affordable housing to address the growing demand within the country.

Local MP for Colne Valley, Jason McCartney (second from left), recently joined Halliday Clark Director, David Halliday (far right) for a tour of the ongoing Globe Mills project in Slaithwaite. Halliday Clark are providing design services for the extensive multi-million pound restoration of the historic mill buildings, ultimately providing home to the University of Huddersfield Innovation Hub together with commercial and retail units and is intended to provide hundreds of jobs to the local population, aided by a £2.9m investment from the Government via the Local Enterprise Partnership’s Business Growth fund. 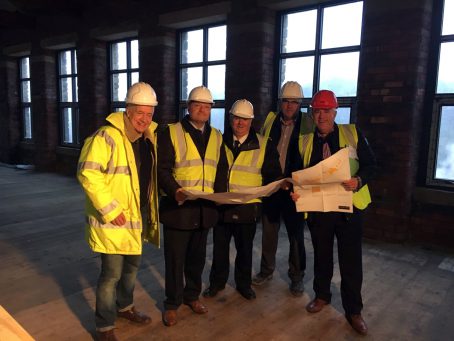